Its back to Liverpool for the fifth trip...
RUSHWORTHS - Whitechapel, Liverpool.
In 1971 this was the first album i actually queued for, getting to the store bright and early on the day of release.Rushworths had been the largest music house in Europe during the 1960s, with five sales floors of musical instruments, televisions, record players and household appliances, as well as sheet music and more importantly for me, records.The street frontage now looks nothing like it did but if you look up the impressive architecture is still all there. Many of the bands from the Merseybeat era shopped there and I have a feeling Paul Mc Cartney bought his first guitar from Rushworths, though dont quote me on it.
DEEP PURPLE-FIREBALL
Released in July 1971 ,thats nearly 50 years ago. Fireball the bands fifth album and the second with the Mk II line up.The excitement generated from DEEP PURPLE-IN ROCK (the first album i ever bought) made it essential for me to pick this up immediately. IN ROCK is such a great album so expectation was very high, have to say on first play i found FIREBALL disappointing lacking the raw edge of the previous album. It was more polished, experimental a fact lost on me on my return from Liverpool. Happy to say it did grow on me but my Deep Purple journey didnt carry on after MADE IN JAPAN which is one of the great live albums, full of energy and more aligned to my love for IN ROCK. 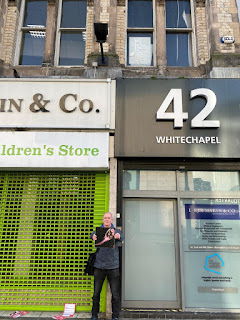