With just over a week to go final preparations continue for our 1st Record Fair at Pacific Road, Birkenhead (by Woodside Ferry terminal) on Saturday 4th June, all Record Dealers are confirmed making it a full house (or Tram Shed) of stalls. 28 stalls FREE ENTRY 10am-4pm with DJ sets, Live music and additional complimentary stalls.

In addition to the Record Fair, the vintage tram will be running , also the River explorer Ferry on the Mersey with local things of interest very close by being a stroll the Hamiliton Square gardens,Birkenhead Priory,Riverside Walks, Transport Museum and of course the Artisan market at Woodside Ferry Village. A little futher out of town is Birkenhead Park , designed by Joseph Paxton – with the support of Edward Kemp and set out to create a place which replicated the pastoral countryside and included an assortment of features such as lodges, bridges and a boathouse. model upon which some of the most famous public parks around the world – including New York Citys Central Park were based,this year celebrates its 175th Anniversary.

HOW TO GET TO PACIFIC ROAD

By CAR...head to Woodside Ferry and either park in Pacific Road itself which is a road that runs alongside the Tram Shed to the Mersey, this is metered but right next to the venue. Alternatively on approaching Woodside follow keep right and park either in Woodside Car parks which are again metered or in the FREE car park at the DRIVE IN CINEMA which is available for free as mentioned until 6pm.

Woodside is the home to a large Bus terminus that connects with many places on the Wirral.

Adequate space to lock up your bike at the venue, the Wirral Coastal and Cycle path passes the entrance to Pacific Road next the the ventilation shaft (you cant miss this landmark) located on the shores of the Mersey.

The River explorer Ferry runs at the weekend and can be accessed at Ferry Terminals on the Mersey.

John Lennon Airport....guess this one is wishful thinking!

Hope to see you there!

The Nostalgia trips halted by events of the last couple of years are  back to celebrate our 1st Record Fair at Pacific Road,Birkenhead in 2 weeks (Sat.4th June).Our visits to record shops that no longer exist has a twist this time as Skeleton Records, Birkenhead an institution for vinyl lovers for over 50 years is still trading on Oxton Road in the Birkenhead. But we have revisited two of their previous premises returning with our vinyl purchased all those years ago. Both on Argyle street in the Town and this area is very special to me for so many reasons. The original shop i just about remember as being young at the time (probably around 1972) it was a place full of strange smells, joss sticks, weird edgy magazines and lots of vinyl..... here i picked up.

Released in 1970 i first heard this at a friends house in Eastham and was blown away by the track Vivaldi which is classical music taken to the edge of madness...amazing. This track clocks in at nearly 7 and a half minutes and i was lucky enough to see them do it live at the Stadium, Liverpool in the early seventies. The band were folky,electronic, proggy i was definately hooked and mesmerised by Sonja Kristina at the time! 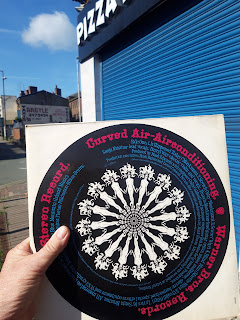 Despite its reputation for heavy rock i did manage to pick up a few prog albums including this album, the 5th album by the band in 1974, another folky neo classical outing but singer Annie Haslam to me has the purest voice and seeing the band live was something i have never forgotten, front row close up quite an experience. Long structured changing tracks, played beautifully , although someone i went with who preferred heavy metal left early on his motorbike and oddly ended up at a bikers haunt in Shrewsbury, cant please everyone. 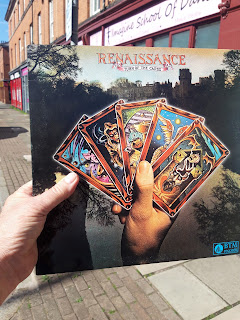 So there it is, more memories revived by the planned visit for our next Record Fair, oh yes nearly forgot i saw the movie Help by the Beatles on release at the ABC on Argyle Street, will there ever be hysteria like that again. All i remember is screaming girls besotted by the Fab Four (especially John and Paul) .

Argyle street leads to Hamilton Square then on to Pacific Road, happy days then and now.

If you want another Nostalgia trip let me know, not meant to be self indulgent just a reflection on the times and we must all have our own tales to tell.

Just under 3 weeks to go until our next Record Fair at Pacific Road,Birkenhead (Near Woodside Ferry), we are very excited about this amazing venue where there will be 28 stalls on the day. This historic Tram shed will be filled with some of the top Record Dealers with DJ sets and Live music. The vintage tram will also be passing the entrance stopping to pick up if you want to visit the artisan market,eateries and bars at Woodside Ferry Village. Free entry , we cant wait!

We are updating our RSD page daily to reflect whats left from last Saturday. After Friday all titles remaining nationally will be available from Independent Record shops websites. We will integrate any of our left overs into our racks. We will be open 6pm-8pm this wednesday should you want to pop in to check whats left in the box. Usual Thursday to Saturday opening times to follow this week.

Thank you all for supporting our shop and making it yet another great RSD!

Next Saturday 23rd April we will be participating in the 15th Record Store Day, actually our 13th too.

SHOP OPEN 8am
Exclusive titles available on a 1st come first served basis. Lots of information on our website RSD page.
A great day celebrating the culture of the Independent Record Shop.

Many thanks once again such an amazing turnout for last Saturdays Record Fair at Ty Pawb, with the big lunchtime kick off Football semi final in Town on the day we were unsure how this would affect the attendance at our event, we neednt have worried....so thank you it was a great day!
We move on to a completely different venue for our next Record Fair, a debut for this venue and one we are very excited about. It has parking outside venue and nearby at Woodside. More soon but here are some preliminary details