RECAP  - On a mission for 2020 to re-visit 12 locations/shops/stores where i purchased vinyl but no longer exist as a record shop,seemed like an interesting exercise to do to mark 50 years of personal collecting, obviously tinged with some sadness as i will be be visiting shops that now exist as something else.There will no particular order or preference and not chronilogical in terms of vinyl release dates.As previously mentioned it maybe of no interest to anyone else (or it maybe), but i am really enjoying the step back in time. 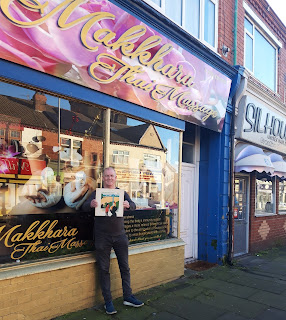 GRAVY TRAIN - 61 Mill Lane, Liscard,Wallasey
This was a small shop with some great stock on the edge of the town, going back in time this was one of the many interesting record shops to visit on the Wirral.
Eno-Another Green World (1975), already owning his first two albums this 3rd outing saw a shift to something different, less rock and more ambient and was for me my favourite of the three. From dropping the 'needle' track 1 side 1 'Sky Saw' i was hooked.'Another Green World' also features contributions from John Cale,Robert,Fripp,Paul Rudolph.Hard to believe its nearly 45 years old,the following Ambient Eno albums
would set the bar for this genre....
at 2:29 pm